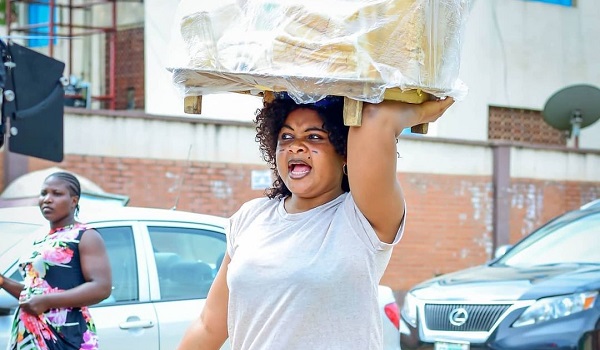 Breaded Life (2021) Synopsis: An irresponsible young man in conflict with his mother wakes up one day, and to his surprise, no-one he knows can recognize him, except for a local bread hawker.

If you are looking for a tight plot, excellent acting, unusual reveals, and situational comedy, with a touch of home-grown romance, this is the movie for you.  Breaded Life has the viewers laughing from the first scene and does not let up till the last scene, including the post script. This movie, which is a cocktail of laughter, emotions, with a strong vine of authentic romance holding it all together, is a sequel to an earlier one by the same director, Biodun Stephen. I am glad to see that it is a refreshing departure from how Nollywood does sequels. It was not a direct continuation of the previous story, but characters from there were seamlessly flowed into this.

Breaded Life is the classic story of rich boy, poor girl romance, but with a plot twist that speaks of excellent and out-of-the-box thinking. It is the kind of feel-good story that leaves you grinning from ear to ear.  The rich boy finds himself at the mercy of the benevolence of the poor girl, who turns out to be his life-saver.

The story draws you in so much that you find a bit of yourself in all the characters. It weaves everyday character, everyday life, everyday comedy into a story of self discovery, paying penance for years of indulgent living, and concluding in a reveal that the director has been subtly hinting at, but which you are not able to touch till it is handed to you. You keep guessing, but when the reveal happens, it is so satisfying that you are happy for the suspense.

Every single character in the movie did an excellent job. This includes Biodun Stephen playing a cameo role. But Bimbo Ademoye and Timini Egbuson deserve the best accolades. Bimbo is such a versatile actor, it is a beautiful thing to watch. She embodies the character of the bread seller, who life keeps dealing a bad hand, yet she rolls with it and makes the best of it. Bimbo must have trained for months; you will believe she is an Egun woman. She also speaks the language, both of the street and of the character, beautifully.

Timini Egbuson has truly grown as an actor, and it is refreshing to see him able to follow the development of his character from a spoiled rich kid to a hard-working street hustler.  The chemistry they both display on the screen is a thing of beauty to see.

While every movie or work of art has its flaws, Breaded Life is almost perfect. A few of the scenes may have gone on a tad longer than necessary, but they do not detract from the overall enjoyment of the story. The locations are perfect for the movie, giving us such a rich viewing experience, moving us from the affluent neighbourhoods to the almost destitute areas where people have to work for daily wages.

Breaded Life is a true Nigerian romantic comedy that will tug at your heartstrings, and you will want to see it again and again.