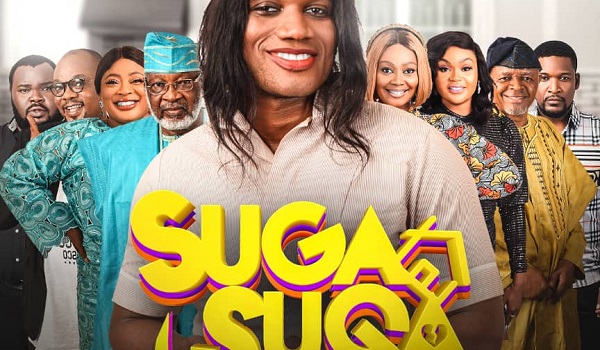 Suga Suga (2021) Synopis: The story is centred on the family of Dr. Durojaiye, a wealthy billionaire whose lust for young girls tears his family apart. Everyone’s little act of craziness brings the family back together, as an affair considered to be a threat to the family blossoms.

Contrary to its title, “Suga Suga” leaves more sourness and staleness in the mouth than sweetness. It comes through with a weak plot, a scattered story line, and a watery script fill with contrived and deliberate comedy cast with unnecessary and unfunny comedic characters, who have nothing to add to the story. I am tempted to say that Suga Suga would have been better as a 40-minute comedy on television, but that would be unfair, as even TV is expected to live up to certain minimum standards.

The opening scene is a reminder of the early stages of Nollywood, and not in a good way. The movie  takes too long to establish its plot, when we see the plot, it is still confusing, the story is all over the place. But we finally get it: this is the story of a cheating old man, a slighted wife, and grown children who are torn between both parents.

One thing to look forward to in a movie, especially a romantic comedy, is the quality of dialogue, as well as memorable one-liners. The dialogue in Suga Suga is totally unexciting and pedestrian. There is no attempt to establish a story arc for any of the characters; not a single character has a depth to them.

The movie has surprises that have no connection to anything. For example, someone pulls a gun in a social situation, and he gives the excuse that he is in the force. Yet, for the duration of the movie, we never see him in uniform or at work. Also, apart from the drivers and maids, we do not see any of the characters go to work, or their source of income captured, yet they are spending money.

Suga Suga has too many eye rolling scenes that eventually ended in an anticlimactic resolution of a weak conflict. The music is too loud and a lot of the scenes have poor sound, so that we do not hear some dialogue. It is a struggle not to sleep through the experience.

The movie introduces some new faces, and we are able to focus on their acting skills, which still need a lot of work, but the stars like Wole Ojo and Ayo Adesanya are not at their best either. They could have injected more life into the story.

The few and far between laughter in Suga Suga is not enough to redeem the poor story, weak dialogue, and watery plot. For the effort, this movie is not something to see again.