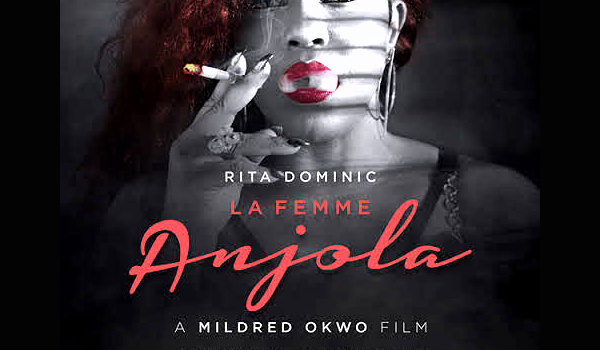 La Femme Anjola (2021) Synopsis: “La Femme Anjola” tells the story of a young man, Dejare (Bassey), who becomes entangled in a deadly game of cat and mouse between Lagos and Cape Town when he meets and falls for a mysterious woman, Anjola (Dominic), whom he simply cannot have.

If you ever thought Nollywood couldn’t give us a psychological thriller, you might have to eat your words now. This movie is a brilliant psychological thriller that had the audience not just on the edge of their seats and talking to the characters, but also earned an applause when the curtains were drawn.

La Femme Anjola opens with what would later be revealed to be one of the ending scenes and that opening is full of action, questions, and wonder. What is even more beautiful is that these questions are answered at different points along the way.

The quality of the script cannot be faulted. It shows a well researched storyline that flows naturally and has no stilted parts. You would keep wondering, thinking you had solved the crime, only for you to later realise the script is several steps ahead of you. The movie is two and half hours in length, but there is no dull moment.

A movie has many moving parts. One of these parts is dialogue. A brilliant story could be watered down by mediocre dialogue. La Femme Anjola has excellent dialogue. The verbal jousting of the actors is enjoyable. As dark as the movie is, it has moments of unforced humour and laughter, providing relief from the heaviness of the plot.

A very important part of a movie is how the audience relates with the lead characters, both protagonists and villains. The way to achieve this is to provide their background and provide a sympathetic connection to the audience.  La Femme Anjola does this well. I became sympathetic with the villains: I could see humanity in them; after all, nobody is all bad. Every twist in the story is totally unexpected and the movie truly shows, rather than tells, us the story.

The brilliance of a movie is a collaboration between the actors and the director. I must say every actor brought their A game and left everything on the screen. This holds true for even those who appear in only two scenes.

Rita Dominic still has the goods: she fully portrays the femme fatale – the lady a man still wants to love and save from her pain. Nonso Bassey as Dejare is brilliant; he embodied the right mix of brilliance, intelligence, and naivety required for the role.

The production quality of La Femme Anjola is very good. It is hard to believe it is not Rita Dominic singing directly, which speaks of very good directing and editing.

There is good use of silence; there is no rush to fill every space with sound or music. The movie allows the silence to speak for itself and lead the audience on.

I enjoyed seeing very good parts of Lagos, both on the mainland and the island, used, unlike other movies that stay in one location. Lagos is a beautiful place to shoot a movie, especially if the diversity of the state is put to use, as seen here. Accident scenes are usually tricky for Nollywood to portray, but it was a pleasant surprise to see a very believable one here.

La Femme Anjola is a well packaged Crime-thriller that deserves every award coming its way. I look forward to more beautiful storytelling like this. Movies of this overall outstanding quality may cost a bit more, but they are totally worth it. Nobody can tell our stories like us, and we need to tell them in ways that are unique to us.