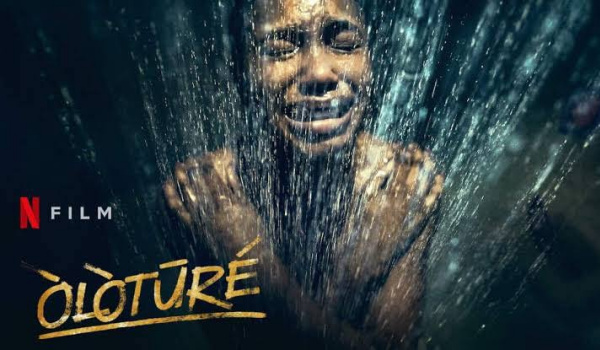 Oloture tells the story of Òlòturé, a young and naive Nigerian journalist who goes undercover to expose the dangerous and brutal underworld of human trafficking. Based in Lagos, it shows how sex workers are recruited and exploited overseas.

Òlòtúré is not a movie for the faint-hearted. It is a tear jerker. Yes; it is make believe, but it is fully believable. Òlòtúré takes your heart and emotions, scrapes them raw and provides no salve. You are left bleeding and feeling helpless, exactly like the women who are experiencing the horrors of trafficking.

It is the story of an investigative journalist who went deep undercover to investigate a women trafficking crime ring, and in the process went through a most gruesome experience.  The movie opens to the scene at a club, where we see how sex workers hustle to find customers and sometimes quarrels break out. A very unattractive patron shows up and his regular customer tries to warm up to him, but he wants a different girl this time. He picks Ehi/Òlòtúré. It is our first introduction to her. She escapes through a toilet window, raising questions about who she truly is. If she is not a sex worker, what is she doing there?

Next, we are introduced to the squalor that the girls live in, paying weekly rent to a madam. Linda is Ehi’s friend and Ehi shares with her that she would like to go to Europe to have a better life.  Linda finally confides in Ehi that there is a lady who helps people get to Europe, at a cost of $1200.

It is refreshing to see Sharon Oja in a different role, the lead role of a strong female, not the usual romantic, rose-color eyed girl. We eventually see her go with a man, supposedly a customer, but who turned out to be her colleague. Ehi is a journalist, working undercover to document human trafficking.

She is almost caught and her cover blown when she is found recording a conversation between Linda and Alero, a trafficker who is arranging the Europe trip. We later get to know that Alero became the madam by sending people to Europe. She has bosses too, but she has risen up and now has some wealth. Alero is equally sorely afraid of her boss, who is in turn afraid of his own bosses, because errors and mistakes are not tolerated. Death is the punishment.

Alero invites the girls to a politician’s party. The host is Sir Phillips, who drugs and rapes Ehi/Òlòtúré at the party. That was a turning point for Ehi/Òlòtúré. From that time, it became deeply personal and she decided she was ready to go all the way. Her senior colleague, who was introduced to us earlier, is a fellow journalist, Emeka. He tried to persuade her to come out from the undercover. He was of the opinion that the information she had gathered was more than enough. Plus, Sir Phillip was a popular, respectable politician, who supports orphans.

The rape experience was such a deeply painful experience for Ehi/Oloture that she could no longer go home happily to visit her mother as she had done previously. She sought to take revenge, but she was discouraged by Chuks, a pimp who was almost out of business and had only one girl left to manage. Chuks was brutally violent to the only girl he handled, and every other person steered clear of her, offering her no help, because Chuks was dangerous.

Oloture is also the story of Linda, the breadwinner for her family back in the village, who decided she and her little sister should go to Europe. She paid the required $2400 passage funds for them both, and was told her sister would be in high demand, because she is still a virgin.

The journey to Europe is designed to instil maximum fear in the girls, despite paying through their noses for the privilege. They were stripped naked  to dehumanise them. To instil fear, the girls were taken into the forest to swear and perform rituals that included lying in a coffin. The handlers searched them to ensure they had no means to communicate with the outside world to strike terror in them.

Ehi/Oloture however was able to smuggle a phone to keep communicating with Emeka, and provide an approximate location. This phone would prove to be the undoing of Linda. Emeka tried to rouse the law enforcements to rescue the girls, but the red tapism and slowness of the appropriate agent was a major factor, and by the time they got to the last location, the traffickers had left.

The girls were given fake passports from different African countries. The journey is by road and Linda, knowing her mother would be worried, begged Ehi/Oloture to allow her use the smuggled phone. But she was caught and all hell was let loose. Linda was beheaded in the presence of them all, and her little sister fainted. Ehi/Oloture had to take care of Beauty from then on. The death was designed to be maximally gruesome to strike maximum fear in the heart of the girls.

In the end, even with the attempts to escape, and Emeka right here at the border trying to get to them, Ehi/Òlòtúré never made it out and we are left bereft as she and the other girls were driven past the Seme border, after their handlers had bribed the border officials. We saw Beauty run past Emeka back into Nigeria, but he did not know her, so he could not stop her and help.

Ebony Life is known for big budget movies designed to show a lot of wealth and colour. This movie is a sharp departure from that. A very welcome departure.  The movie has sharp colours, clean pictures, as well as beautiful and appropriate music. Locations were perfect for every scene. In watching the movie, you are confronted with the stark reality of the lives of these women that the society vilifies at every turn, and you can’t help but see they have little choice.

You also get very angry because you see their exploitation by everyone that ought to help them. The camera angles and lighting were done to show pain, pleasure, and danger, and you can feel these raw emotions. You are drawn in and you become a part of what you are watching.  Alero is a quintessential example of what happens when the oppressed come to power, they become greater oppressors.

There were almost no negatives in this stark movie, except for two slips that I noticed. There was a time lapse hole at the beginning of the movie: after Ehi/Oloture escaped from the brothel at night, she did not reach the hostel till the next morning when it was daylight.  We were expecting we would see or get to know where she spent all that time later in the movie, but we never saw it.

Some of the other girls acting the part of being trafficked were out of character. One would expect palpable fear and terror on their faces and behaviours after witnessing one of them beheaded and during the other traumatic experiences they went through on the way to the border.

The ending is even sadder than the movie itself. But this is not a fairy tale, hence the ending is true life itself, and as the menace of human trafficking is still very much with us, it is an appropriate ending.  Thousands of girls are trafficked, believing they have no choice, and would rather endure the inhumane treatment in their quest for a better life.