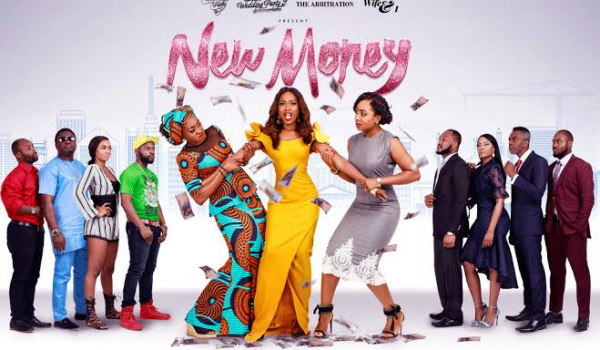 New Money (2018) Synopsis: New Money tells the story of 23 year old Toun (Jemima Osunde), who finds herself thrown into the world of the rich after her father (Kalu Ikeagwu) left his multibillion-dollar company to her in his will.

She learns that her mother, Fatima (Kate Henshaw) was legally married to her father, Ifeanyi, although due to strong opposition from his family, the marriage was annulled. He remarried, this time to Ebube (Dakore Akande), but they never had any children together.

Toun ignored her mother and entered into a life of luxury which is threatened by her uncle, Chuka (Wale Ojo) and his son, Patrick (Adeolu Adefarasin).

Her decisions put the company in a negative light and portrays her as an inferior CEO. She struggles to find her old self again, while pushing away old friends and falsely accusing new ones. Through this all, Joseph (Blossom Chukwujekwu) stands by her.

New Money is your usual poor girl from a really poor family suddenly thrust into unbelievable wealth and then makes a mess of everything, with all the usual suspects. There is the best friend and the idiot boyfriend who don’t like each other. There are those who want to take the wealth from her, and those who believe she should have it. It is the usual cheesy romantic comedy with money in the centre. It makes for good laughs, but there was not much depth to the story.

One thing that strikes you is the crispness of the movie. The cinematography is beautiful and makes for enjoyable and satisfying viewing.

Though the movie is a grass-to-grace story, there was very little display of ostentatious wealth, thankfully. This is a pleasant departure from the typical big budget movies the New Nollywood is known for. Apart from the club scene where a lot of money was spent in one night, there was not much talk of money outside of the scenes about business deals.

Jemima Osunde gave a good report of herself as the lead. She is new to Nollywood, and it is apparent she is well trained and embodies the character fully. Wale Ojo was an almost perfect act as the scheming uncle who keeps up apearances while pursuing a hidden agenda. He embodies it very well.

Folarin Falana (Falz) has obviously made a success of both music and acting, and he straddles both, bringing the character from his comedy skits to the movie. It is good to see him stay true to his character.

However, it would be refreshing to see him play a seriou role without hiding behind the comedic toga of bad English. This would truly establish him as a true actor and increase his range.

Seeing Dakore Akande as the grieving widow who is truly ready to fulfil her late husband’s wish, is a lovely departure from the norm in Nigerian society. We see her provide the help Toun needed when the latter messed things up.

One of the drawbacks of New Nollywood is overacting, but New Money had no overacting that we could see. This is kudos to the director making the acting and movements tight without prolonging the movie.

Nigerian music has come a long way, and it was beautifully showcased in this movie. The music of Simi and Falz played prominently. I look forward to the day when Nigerian musicians will write soundtracks specifically for a movie. It would also be great to see such sound tracks stand on their own and win awards.

One of the ways that New Nollywood has been promoting the country is to showcase tourism locations. Most of the world has never been to New York, but we all instantly recognize the Big Apple. It is the most destroyed city in movies. New Money did not do much of this showcase of Nigerian locations.

Having talked about the good parts of the movie, a major drawback for me is that the movie did not have a lot of depth. New Money followed the regular pattern of romantic comedies, with minimal Nigerian cultural flavour. I would have liked a bit more of depth in the conflict. Instead what we are treated to is the run of the mill conflict that all audiences are used to and could tell the story with their eyes closed. The acting was great, the story was good, but another angle could have been explored to give it a different kind of excitement.