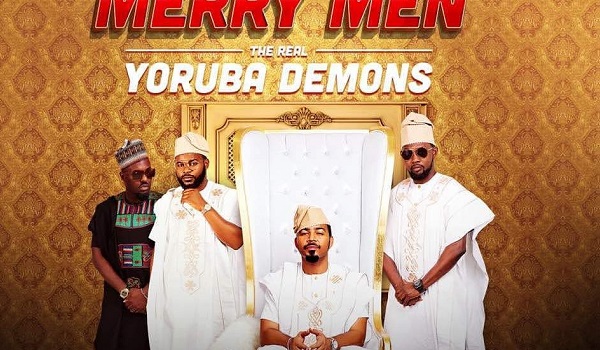 Segun Arinze as Bank IT Staff

Four rich men (the Merry Men) seduce powerful women, get contracts from the political elite, steal from the rich, give to the poor, and have sex with the hottest women in town. They face their biggest challenge yet when they antagonize a notorious and corrupt politician who plans on demolishing a village to build a shopping mall. The four men scheme to stop the demolition and so save the poor people of the village.

Merry Men: The Original Yoruba Demons promised laughter and action, as an action comedy, but it gave a less than average delivery on both promises. In a bid to depart from the big budget slapstick flicks Ayo “AY” Makun is known for, the movie sacrificed the laughter, and there was only puny action that could have been done without, or done better.

The laughter was few and far between, the action was forced, and the movie left you wanting more, not in a good way. Sex was often overt and sometimes unnecessary in some scenes. It appeared like a filler to ensure the movie hits the almost two hour mark.

Social Media gave us the popular moniker of the Yoruba Demon, a stereotype description of men, not necessarily from the Yoruba tribe, but rich and handsome men, within a particular age bracket. These men supposedly attract women, with their charm, wit and money, use them and dump them, but the women still love them.

The movie plot is built around the story of a rich and privileged, modern-day Robin Hood and his men, who use information, obtained through illegal means, and their connections, to rob the political elite, swindle them, and supposedly give them to the poor.

I failed to see them actually give anything to the poor, or set up anything that helped the poor – the visit and rescue of the young man being a rather lame attempt. To properly showcase these men actually helping the poor may have required deeper thinking on the part of the writers, but we saw none of it, putting a dent to the image of the group as benevolent thieves.

There are a few things the movie had going for it, including beautiful scenery and amazing colours. We got lovely views of Abuja. The well laid out roads that were good enough for Ayo and Dera to race on, a race that was rather short and lacking in adrenaline than was expected. It was however refreshing to see a showcase of a different location apart from Lagos.

Product placements were well executed: they were in use, and not in the face of the viewer, but we saw them.

Nigerian music was put to good use all through the movie, and it invited you to dance along, even as you wonder at the point of the movie.

It was nice to see Ayo Makun in a different role, not his regular his loud mouthed, over-the-top protagonist, with a Waffy heritage. He left the centre stage for Ramsey Nouah, a veteran who never fails to give a stellar performance. Here, Ramsey is typecast as the benevolent, handsome, indulgent and rich, heart breaker crime boss.

Folarin “Falz” Falana, as Remi Martins, in keeping with his social media persona, is the grammatically challenged geek, and I must say his jokes were natural and drew laughter. But sometimes, his comedic interludes fell flat.

It was hilarious to see Otunba turn the table on the Merry Men when they tried to use a sex tape to blackmail him. He told them to go back and learn better.

For example, it was not exactly clear what Jim Iyke’s role as Naz Okigbo was in the movie. He was a member of the team, but what did he bring to the table? Ramsey, as Ayo, was the clear leader. AY, as Amaju, was the gigolo who used his access to powerful women to extract information for the team. Falz was the geek who hacked systems to access sensitive information for the team. The only side we saw to Naz was that he could cook and that he was in love with Ayo’s sister.

The plot of the movie was like a basket that leaked everywhere and there were hardly any firm connections in the stories. The connection to Garki was too loose and left too many questions unanswered. It seemed to be a ploy to keep the viewers in suspense, but the suspense was not resolved in the movie. We were quickly moved on to other parts of Abuja.

Also, there were hardly any back stories to the lead characters. Ayo narrated some of his, as a life long battle with a father he loves dearly. What was Amaju’s story? How did he become this person? Why is Remi Martins a hacker and how was he recruited into the team?

Such back stories are expected to make characters relatable, but all we saw were four men defrauding other people. There are so many unanswered questions in Merry Men, and these are not the type questions that great thrillers leave you with, but the type that confuse you and leave you wondering what the plot really is.

The casting of this movie left a lot to be desired. It boasts of some the best actors Nollywood has to offer, but the roles they had did not use their skills. Ali Nuhu was billed as one of the stars, but he barely managed to appear in two scenes. As the head of marketing in the bank, he could as well have been a cameo.

Why cast Segun Arinze as a sex crazed head of security in a bank, who preys on young girls? That role, if necessary, could have gone to another actor who needed the exposure.

Ayo Makun as a gigolo was forced and grating on the nerves, making you want to shut down some of his scenes. They were forced and lacking in charm that gigolos are known for.

At the scene where the authorities were going to arrest Ayo, what was the point of the shootout? Was it necessary to the story? The Merry Men had not shown any violence. Arresting Ayo in such a manner took away from the already weak plot of the movie.

What did Dame report that made the authorities go after them? Why was she arrested? Who investigated her crimes? At the beginning of the movie, we saw the authorities watching them, but beyond the scene of the police team lead cursing them, we saw no proper investigation. Then they were all free, how come? How did Naz escape? How come they are all free now?

The funeral scene was an attempt to throw us off the scent, to make us think his sister died. It was unnecessary to have them all wear black, as if they were mourning a young person. We all know Yorùbá people are well celebrated in death once they have crossed the 55th year mark; they are not mourned in the manner portrayed in Merry Men.

If the movie had spent almost two hours to portray the seeming real scenes of Nigerian society, it was rather juvenile to show an older man being buried like that.

As expected of Nollywood big budget movies, Merry Men had its own wedding scene. We love our celebrations, but the proposal scene at the wedding was cringe-worthy, both in concept and execution. Public proposals are the in-thing, helped by social media. But for a brother to steal the thunder at his sister’s wedding was uncalled for.

On the bright side, the cinematography of this movie was beautiful to see. It obviously had a lot of funding and support from big brands, including Transcorp Hilton. The movie however did not have the story, the dialogue, or the plot to justify the big budget.

It had a great cast that could have been provided with a better story. We have seen these same actors in other Nollywood titles that had us applauding at the end of the movie.

I give this movie a 2 out of 5, mainly for the beautiful scenery and the cinematography.