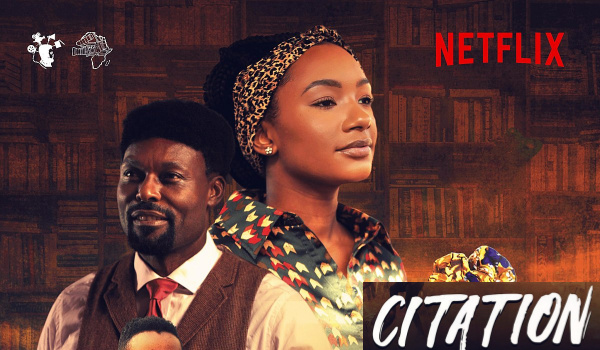 Citation is a 2020 Nigerian movie available on Netflix. It captures the ordeal of a young woman who exposes a popular professor for sexual harrassment/abuse, specifically an attempt to rape her,  and her travails to get justice as she goes against the academic establishment. The movie is based on real life events.

Citation was shot on the campus of Obafemi Awolowo University campus, Ile-Ife,  Osun State in southwestern Nigeria, as well as Dakar, Senegal and Cape Verde.

From most of the movies produced and directed by him, it is clear that Kunle Afolayan is a social crusader.  It is apparent he desires to effect change through his productions.  He is known to touch on popular and unpopular objects. As such, his movies don’t always have a happy ending. Thankfully, Citation does, and it was a loud cheer to see justice done, though it looked like evil would prevail over good.

The movie opens to a female student on a phone call with her professor, pleading for him to change her grade and give her the right grade. He told her it was up to her to decide if she would get a good grade. She repeatedly mentioned his name during the call, and he kept saying she should not mention his name.

She eventually agreed to book a room in a motel, and it turned out to be a set up to catch him, as her boyfriend and his friends rushed and meted out jungle justice to the professor. The whole encounter was live-streamed.  The situation ended in tragedy as the prof was knocked down by a hit-and-run driver, resulting in his death on the spot. This opening gave an inkling of what was to come in the rest of the movie.

We are then taken two years forward in time, where we see Moremi (Temi Otedola) with Gloria (Ini Edo) and Kwesi (Adjetey Anang) walking together and discussing how young Moremi is to be studying for a master’s degree at 20. It is a lovely and fun scene, with the usual ribbing expected from university students.

We are taken to the classroom where the dean of faculty introduces the visiting professor, Professor – Lucien N’Dyare (Jimmy Jean-Louis) who is to be the coordinating lecturer for the masters programme, as part of exchange programme.

We then see Moremi in front of the senate panel of inquiry, after walking with Angela, her counsel. In telling the story of the attempted rape, we are then taken through the story in a series of flashbacks that unravel the plot.

There is a lot of back-and-forth between the flashbacks and the present, which sometimes was confusing. During the telling, we see Moremi show such brilliance and independent thought as a student, and the professor taking a special interest in her. It all appeared to be innocent and benign, till it was not.

We see the professor pulling strings to keep in touch with Moremi. He ensured she was in his tutorial group, and also pretended not to know how to drive a manual transmission car.

Sweet and naive Moremi was willing to teach her clueless professor, and what looked like a beautiful friendship started. Moremi was all about her ambition to work in the UN, and the professor having contacts there piqued her interest. It was obvious he was grooming her, but she was oblivious of it.

The conversations began to turn, starting with innuendoes, till it became blatantly sexual, and Moremi began to resist.  The Prof. ensured they went to Senegal and Cape Verde together, where he tried to kiss her in public after her student doctor boyfriend seemed to have broken up with her.

It culminated in him trying to rape her after she was inadvertently left behind after an Easter party at his house. She escaped, using a self-defense move taught to her by her boyfriend. However, she did not report till he began to victimize her academically.

Meanwhile, on the panel, the two of them have different versions and interpretations of the events that led up to that moment.  The professor insisted it was Moremi who offered him sexual favours in exchange for him connecting her to the UN to get a job after her master’s degree.

He was convincing too, so much that even the audience was almost deceived.  At the last minute, when all hope was almost lost, the memory of an event that happened in Senegal saved the day, and the professor was indicted, and stripped of his office. It was a well deserved victory for Moremi, and for all female students.

The first thing that strikes you about Citation is the beautiful use of colours. The pictures were not just sharp, colours were clear and well contrasted! Kunle Afolayan has, over the years, assembled some of the best hands in the industry for his projects. This shows in the beauty of his cinematography, no matter what you have to say about his movies, you cannot fault his cinematography.

I have been to the lovely OAU campus once in my life. This was sometime in the 80s to attend the convocation of a much older friend. The way  the movie showcased the campus grounds gave me a longing to go to the campus and bask in its beauty.  It was also refreshing to see the movie fully involve a large number of the student population to provide authenticity to the crowd effect, as most other movies are not able to achieve that.

Temi making her debut in acting on the big screen is a huge achievement, and for a first timer, while the acting may not win her awards, I must say she did very well.  Some of the scenes looked stilted and forced, especially with the prof, as Jean is a well experienced actor, with many years and international experience under his belt.

I would have expected him to put her better at ease. Perhaps it is part of the technique to showcase the issues of the movie. Yomi Fash Lanso, as the professor’s lawyer, was pretty much a non-speaking role. All he did was whisper quietly to his client. That was less than desirable. Yomi is a veteran actor. Perhaps another role could have been found for him.

The multiple languages used in the movie was lovely to see, but Moremi, a Yoruba girl had a better handle on French than her native Yoruba. It was good to see her toaster tease her about it; it made it a natural part of the script.

Gabriel Afolayan is one of the best actors in Nigeria. He is a method actor, and even in this supporting role, his excellence shone through. I wonder how long he had to train to be able to display the Shotokan Karate skills we saw him pull off. Using a mix of veterans like Sadiq Daba and Joke Jacobs along with fresh faces was very good for the movie.

Besides Ile-Ife in Nigeria, the movie also took us to other parts of West Africa, a form of tourism promotion, I believe. Hopefully, we can all take time to enjoy the beauty of the continent.

Moremi’s name is also a nod to her historical namesake, who history says sacrificed herself to save her people from continual war. Moremi’s role here is to sacrifice herself to speak up about what other women had been afraid to speak about, for fear of intimidation and victimization. We see her face all of those in the movie.

The humour was natural. Even though the movie is not a comedy, there were natural laugh points that lifted some of the heaviness of the subject matter. It was beautiful to hear the music. To find out all the songs were composed specifically for the movie was lovely as well.

The movie was not without its flaws. Two hours, thirty minutes was rather long for a mellow movie with no major action scenes. Some of the scenes could have been left out, or shortened.

The concert did not have to be that long, if it was just to show Moremi’s birthday at the start of the scene. The afro wig on Prof. N’Dyare’s head was too obviously artificial. I think his bald head would have worked better than the wig.

Moremi wore the same hair for almost a whole session. They could have used different wigs for her. Though the hair was styled differently, the braids looked the same throughout.

The scene in Senegal, where a strange child tugs at Moremi, and she follows him on a strange journey looked romantic, but it was not safe.

In all, the movie, said to be based on real events, took a definite stand against sexual harassment, abuse, and intimidation from people in positions of power against those who they have authority over.

2 thoughts on “Citation: Our Review, including list of Movie Cast, Director, and more”